Aleksandr Solzhenitsyn was a brilliant novelist/dramatist weaving the facts of his own brutal prison camp experience into haunting tales that continue to stir the conscience of nations. Viktor Frankl elevated his own awful Holocaust experience into a "search for meaning." Victor Herman "came out of the ice" and into the hearts of "middle" Americans.

In what is being touted as autobiography, As a Peace-Loving Global Citizen, the Reverend Sun Myung Moon shares his thoughts on his own life amidst the horror and inhumanity of North Korean gulag and beyond.

Known for many things by many people within his own native land and throughout the world - from charlatan, "brainwasher" and cult leader to name the less flattering - to religious leader/teacher, patriot (or partisan), futurist, humanitarian, peace activist, poet, environmentalist, fisherman, rugged individualist, and finally, Messiah, to name the most notorious, perhaps least palatable for many; this book expresses Sun Myung Moon's unabashed and unique view of his life as well as his vividly perceived role as the "True Parent" (with his wife, Hak Ja Han) of all.

Having recently re-immersed myself into the world of "gulag literature" and having just read a copy of the recently translated pre-release version, I commend the team of translators and editors for meeting the reportedly challenging deadline. Moreover, as a "unificationist" myself, I must express my deeper, continually growing admiration and appreciation to the man I've simply called "Father" for over 30 years.

There are many personal anecdotes about the life of Reverend Moon contained within the 347 pages of this small book, particularly early into the first few chapters. Some of them may catch even the most skeptical or cynical, quite off guard.

Above all, however, the underlying theme remains that of a man driven and undaunted; ever forward for the sake of a mission, his mission; "the liberation of God's heart" and/or (simultaneously) the liberation of everybody on earth as well as in "hell."

Reflecting upon the plight of the growing number of church members sent to conduct missionary work behind the "Iron Curtain" (circa 1973) he writes:


"Each time I heard that one of our members had died in jail, my entire body froze. I could not speak or eat. I couldn't even pray. I just sat motionless for awhile, unable to do anything. It was as if my body had turned to stone. If those people had never met me, or never heard what I taught, they never would have found themselves in a cold and lonely jail, and they never would have died the way they did. I asked myself, "Is my life worth so much that it can be exchanged for theirs? How am I going to take on the responsibility for the evangelization of the communist bloc that they were bearing in my place?" I could not speak. I fell into a sorrow that seemed to have no end, as if I had been thrown into deep water. I saw Marie Zivna before me in the form of a yellow butterfly that had escaped Czechoslovakia's prison [and] fluttered its wings as if to tell me to be strong and to stand up. By carrying on her missionary activities at the risk of her life, Marie truly had been transformed from being a caterpillar to being a beautiful butterfly."


On the unification of Germany (and Korea) he writes (perhaps presciently):


"I have studied the unification of Germany for a long time. I have listened to the experiences of those who were involved with regard to how it was that unification could come without a single bullet being fired or a single drop of blood being spilled. In so doing, my hope has been to find a way that is appropriate for Korea. I have learned that the main reason Germany could be united peacefully was that East German leaders were made to understand that their lives would not be in danger following unification. If East German leaders had not believed this would be so, they would not have allowed unification to occur so easily." 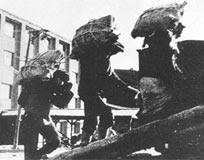 As a Peace-Loving Global Citizen (Korean: 평화를 사랑하는 세계인으로)is the autobiography of Sun Myung Moon, the founder of the Unification Church. Published in 2009 in both Korean and English, by Gimm-Young Publishers of Seoul. The book was first released in South Korea on March 9, 2009 and debuted at #3 on the Business Bestseller's List (경제경영). It has ranked on various (Korean) bestseller lists since then and is ranked 15th on the general bestseller's list there as of October 14, 2009. 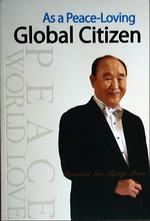 A wider release and (at least one) updated English language edition is foreseen according to church sources.
Over 43 different language translations of the book are also simultaneously being prepared.

Is the world ready (or does it care?) for a "fresh" view of a remarkable man yet engaged in a remarkable journey?

"Through the Red Gate"

edwin
Occasional content writer and editor for various web sites. Was once (briefly) a feature reporter for a major metropolitan newspaper.